The Stanze della Memoria (Rooms of Memory), inaugurated in Siena on 27 January 2007, offer exhibits that retrace the history of the city from the beginning of the 1900s, focusing on the crucial themes of Fascism and the Resistance, through to the ultimate Liberation of Italy.

The city of Siena, like the entire province, was strongly affected by the events of the twentieth century, characterized by unprecedented social upheaval and by the conflicts of war. The Rooms of Memory serve as a window to provide an overview of recent history, prompting daily reflection toward a renewed sense of civil commitment, underlining the importance of freedom and social justice hard-won by the men and women who were active participants in those tormented events.

The Stanze della Memoria take on even deeper layers of meaning when visitors realize that the rooms have been set up in the “Casermetta” (Little Barracks) as the Sienese called the place when, in 1943-1944, it was the headquarters of the Political Police of the Italian Social Republic, where anti-Fascists were interrogated and tortured following their arrest.  From there punitive expeditions were sent against the Partisans.

The museum is made up of a teaching hall and 12 rooms laid out on two storeys, retracing the history of Siena during the last century, specifically in the years from the First World War up to the time of the Liberation of Italy.  The first floor addresses squadrismo (para-military actions by Fascist militias) and the rise of Fascism, dictatorship, the building of public consensus, the infamous Racial Laws; the second floor illustrates the main episodes of the War and of Partisan resistance, memory of which is documented in videos by some of the protagonists, through to Liberation.

In each room there are giant posters, explanatory panels, films and narrative voices that welcome and lead visitors along the way, recreating the atmosphere of the period. Time spent in the Rooms of Memory allows visitors to get to know one of the most intense and dramatic pieces of Sienese history.  The museum is a place that informs and hands on the memory of the struggle against Fascism.

Torture Room: the most “theatrical” space within the museum, lit only by two beams of light, here visitors witness the personal accounts of the people who were arrested, interrogated and tortured at the Casermetta.

The Room of Memory: the room has six screens from which, in turn, six characters retell brief but intense fragments of stories about the Partisans and the Resistance. 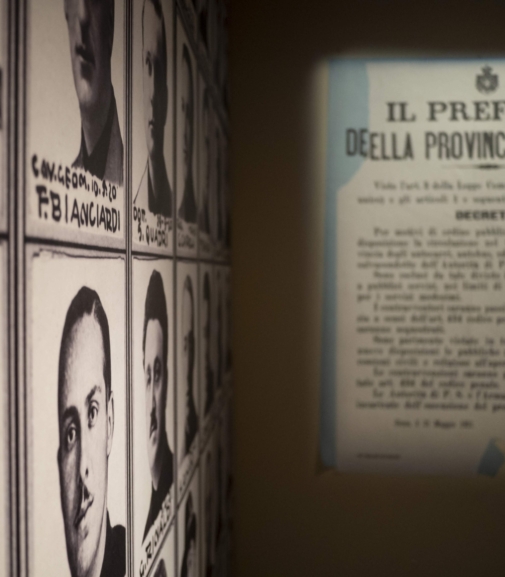 admission is subject to a contribution of at least € 3.00 – thank you!