The Diocesan Museum of Pienza is located in the Episcopal Palace, or Palazzo Borgia, within the architectural complex of the Piazza and Cathedral.  Together these buildings make up the monumental centre of the town-wide renovation project commissioned by the humanist Pope Pius II Piccolomini and designed by Bernardo Rossellino.

The museum evolved from the treasure-filled Museum of the Cathderal and came to include numerous works from various churches in the surrounding territory.  It is laid out in 11 rooms that gather together art from Pienza and from other towns nearby.

The collection boasts masterpieces of 14th-century Sienese painting, such as the famous Madonna of Monticchiello by Pietro Lorenzetti, and the large panel with the Madonna della Misericordia (Madonna of Mercy) by Bartolo di Fredi, originally housed in the Baptistry of Pienza.

The Sienese School of the 1400s is also amply represented by works of the highest quality, including Il Vecchietta’s Madonna on a Throne between St. Blaise, St. John the Baptist, St. Nicholas and St. Florian, a painting that shows the influence of Florentine innovations in terms of its clear, sharp brightness and of its use of perspective.

No less magnificent are the 16th-century Madonna of Mercy by Luca Signorelli and the Renaissance sculptures by Domenico di Niccolò dei Cori.  Later pieces by the Sienese School are those of Vincenzo Rustici, Francesco Rustici, Bernardino Mei and Giuseppe Nicola Nasini.

The museum contains an outstanding collection of goldwork from the 13th to the 19th century.  The liturgical furnishings donated to the Cathedral by Pius II are of special importance.

Perhaps the most highly prized piece is the Cope of Pius II.  The despot Tommaso Paleologo donated this ecclesiastical vestment  to the Pope, who in turn gave it to the Cathedral. The English-made cope is decorated with twenty-seven stories from the life of the Virgin, and it demonstrates the enlightened personality of Pius II, undisputedly the most prominent figure in the history of Pienza.

a work that astonishes the viewer with the elegance of its design and the attention it pays to detail, and most of all with the extraordinary liveliness and intensity of the interaction between Mother and Son.

Cope of Pius II (early 1300s): an indisputable masterpiece, created through the painstakingly refined embroidery technique of anglicanum. The stories illustrated have been stitched with exceptionally vivid narrative ability, and the garment further shows such an incredible variety of animal species that the piece seems to be the translation onto fabric of a Medieval bestiary.

I libri del coro della cattedrale di Pienza—the Chorus Books of the Cathedral of Pienza (15th century): within these volumes of illuminated manuscripts by Sienese artists of the 1400s, the most striking features are the historiated initials showing elegant figures and sacred scenes, often set against the background of the Crete Senesi countryside. 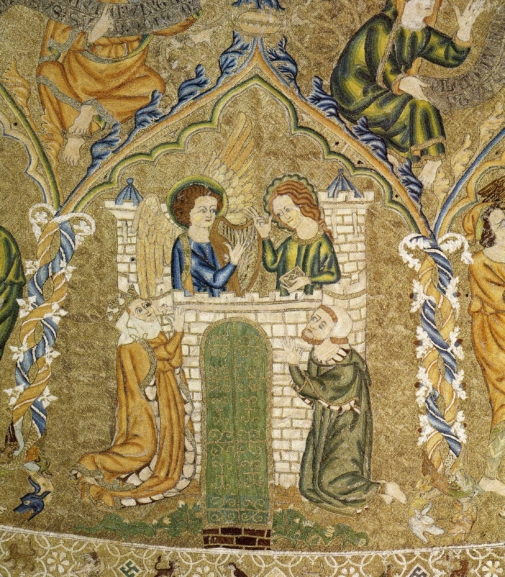 Unlike most other towns, villages and castles in the lands surrounding Siena, including the city of Siena itself, Pienza does not owe its good fortune to the Via Francigena but to a Pope—Pius II, birth name Enea Silvio Piccolomini—who was born and raised here.  The town-planning project that took shape in Corsignano, the Pope’s native hamlet, transformed the village while at the same time maintaining the previous Medieval layout of the roads.  Even today, all streets still cluster around the Corso, the original main road.  In order to realize his dream, Pius II called upon the Florentine architect Bernardo Gambarelli, also known as “il Rossellino”.  After only three years of work (1459-1462), Pienza was completed. Rising magnificently in Piazza Pio II are the Duomo (Cathedral) and the Palazzo Vescovile (Episcopal Palace), which is the seat of the Diocesan Museum.  To the right of the Cathedral stands Palazzo Piccolomini, with its main façade overlooking the main road and its great terraced garden commanding an incredible panoramic view of the Val d’Orcia.  Not far from the centre of town, visitors may walk to the ancient Pieve of Corsignano.  Surrounded by quiet countryside, this old parish church is characterized by its unusual cylindrical bell-tower dating back to the 10th and 11th centuries