The Church of San Lorenzo in Ponte is one of the oldest in the town San Gimignano, and it is so named because it was built near what used to be a drawbridge that allowed access to the Piazza della Cisterna from the ancient Castle of the Bishop of Volterra.

This small Romanesque-style church, erected in the 13th century most likely on the remains of an even older church, comprises a single nave beneath a roof with wooden trusses and a raised, vaulted chancel.

As far back as the early 1300s, the church had a small portico, or perhaps a simple roofed-in covering, to protect a fresco from the elements: the Madonna col Bambino in gloria (Madonna with Child in Glory).  Though the bodies of the Virgin and of Infant Jesus, along with the corona of angels in glory, were renovated in the 1400s, the face itself was painted by Simone Martini, the ultimate exponent of Sienese Gothic art, early on in his career.

It was because of popular devotion to this sacred image that, at the start of the 1400s, the construction or expansion of the portico was undertaken along the entire side of the church, thereby creating a true chapel adjacent to the portico itself.

Both the church and the portico are decorated with extensive frescoes painted at the beginning of the 1410s by the Florentine arist Cenni di Francesco di ser Cenni, who had been trained by the Giotto-style painter Andrea di Cione di Arcangelo, known as l’Orcagna. The theme of the cycle is the Afterlife in connection with the church’s patron saint, San Lorenzo (St. Laurence), who was granted the ability to save souls from Purgatory.  The frescoes show evocative details of the Afterlife in l’Inferno (Hell), il Purgatorio (Purgatory) and il Paradiso (Paradise).

Madonna col bambino in Gloria (Madonna with Child in Glory), Simone Martini (1310) is the most valuable work of the church, the object of fervent popular devotion since the 14th century: a Madonna with a loving, reassuring, motherly face. 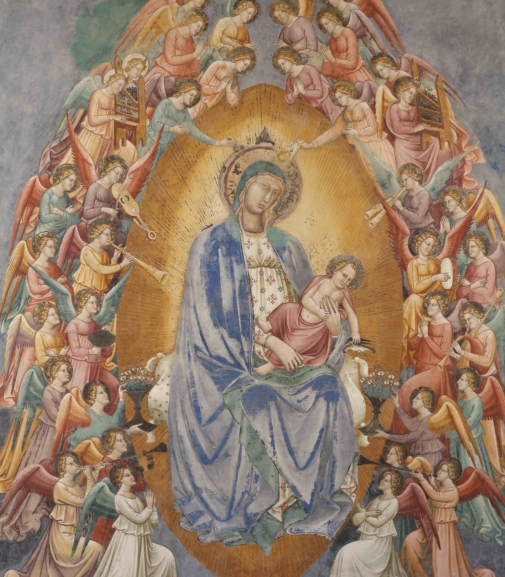 Church of San Lorenzo in Ponte

a single ticket, valid for two days, to access all the museums

San Gimignano, with its famous, storybook-like towered skyline, has been listed as a UNESCO World Heritage Site since 1990, and it is must-see for visitors eager to discover the wonders of the surrounding countryside in the province of Siena.  Founded during the Etruscan Period, growing as an Etruscan and then Roman settlement, San Gimignano became part of the fiefdom of the Bishops of Volterra. It won its freedom during the 1200s before coming under the rule of Florence a century later.  The city is built on the ancient layout crossed by the route of the Via Francigena in a north-south direction (from Porta San Matteo to Porta San Giovanni). At the highest point of the hill are the two main piazzas, which have always served as the centre of activity in the city and have for centuries now been admired by visitors from around the world.  There is the Piazza della Cisterna, and the Piazza del Duomo, lined with impressive buildings and with the highest tower-houses in the city: the Rognosa, which reaches up 52 metres beside the Palazzo del Podestà, and the Torre Grossa, the symbol of the city’s might.  Winding among the tall towers and magnificent alleyways that unfailingly provide unexpected and unforgettable views, a walk through the town is never complete unless it includes a visit to the Rocca di Montestaffoli, the Church of Sant’Agostino and the splendid Cathedral.