The Cassioli Museum of Asciano first opened its doors in 1991, thanks to the noteworthy collection of paintings bequeathed by the Cassioli family, originally from Asciano.  The museum was refurbished in 2007 to accommodate numerous other works of art provided by the Duccio di Buoninsegna Artistic High School of Siena.

This is the only museum in the province to be devoted entirely to Sienese painting from the 19th century.  It is divided into two sections.  The first contains sketches and finished works by the leading figures of the Accademia di Belle Arti (Academy of Fine Arts) in Siena, under the direction of Luigi Mussini from 1851 to 1888.  These artists, including Angelo Visconti, Cesare Maccari, Pietro Aldi and many others, chose to depict scenes from the ancient world and from classical mythology, while also proving to be astute observers of their own epoch.

Luigi Mussini, a staunch supporter of Purist aesthetics in resistence to the advent of Realism, sought to give new life to a “Sienese School”, drawing inspiration from the way the Renaissance system of workshops was organized.

The second part of the museum is dedicated to the artistic career of Amos Cassioli, featuring works the artist painted in Florence where he had set up residence and where he trained is son Giuseppe, who went on to become known as an eclectic painter, as an architect, and most of all as a scultpor.

Pietro Selvatico once described Amos Cassioli as “the first among Tuscan portrait-painters”because of the artist’s ability to probe the psychology of his subjects.  This gift for insight is evident in the works found within the last rooms of the exhibit, from the intense, Ingres-style Ritratto di signora (Portrait of a Lady) to the later piece, Ritratto di giovane signora (Portrait of a Young Lady).

Cassioli garnered substantial public recognition for his large-scale depictions of historic events, such as his frescoes of La Battaglia di San Martino (The Battle of San Martino) and La Battaglia di Palestro (The Battle of Palestro), painted from 1884 to 1886 as part of the intricate decoration of the Sala del Risorgimento in the Palazzo Pubblico of Siena.  Following on his success in creating monumentally sized historic paintings, Cassioli also devoted himself to smaller works depicting similar subject matter, and to evocative tableaux showing daily life in the age of the Ancient Greeks and Romans—a genre much in vogue among the bourgeoisie at the time.  Fine examples are Lo studio dello scultore romano (Study of the Roman Sculptor) and La moglie di Putifarre (Potiphar’s Wife), an opulent, sensual, womanly nude who is the very symbol of seductiveness.

Ritratto di giovane signora (Portrait of a Lady), Amos Cassioli (1880): the pose, the setting, and the style, with its quick, soft, unfinished brushstrokes, are all clearly inspired by Impressionism.  Some details, such as the fashionable clothing, the hairstyle,  and the elegant armchair, lend an aristocratic atmosphere to the work, and reflect a positive-minded society that was open to progress after the Risorgimento wars of Italian Unification.

Il bozzetto della medaglia olimpica (Sketch for the Olympic Medal), Giuseppe Cassioli.  In 1927 the electic artist won an international competition held by the International Olympic Committee to design the medal to be awarded during the Olympics. Cassioli’s drawing shows what would become the most widely used medal in the history of the Olympics, given to athletes from the Amsterdam Games of 1928 to the Sydney Olympics in the year 2000! 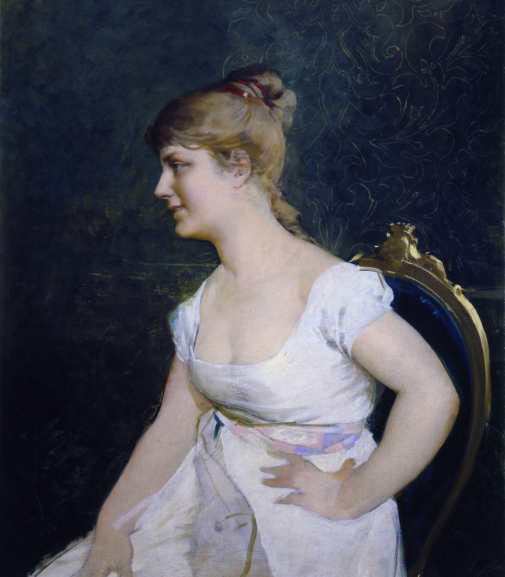 From 1st Novembre to 31st March

From 1st April to 31st October

Saturday, Sunday and holidays – from 10am to 1pm and from 3pm to 7pm

For further information on fares, reduced prices and booking, please contact the museum
Ticket office at the Palazzo Corboli museum.

Not far from Siena, the small town of Asciano stands along the banks of the River Ombrone surrounded by the magnificent landscape of the Crete Senesi (the Clay Hills of Siena). It owes its economic and artistic good fortune to several leading members of Siena’s mercantile class who, centuries ago, invested in this territory, making it of strategic importance to the economy of Siena itself.  The historic town centre is home to noteworthy buildings such as the Basilica of St. Agatha, built in the 11th century, and the Churches of St. Augustine and St. Francis with their great fresco cycles.

The main street running through the heart of this exquisite walled town was once part of the historic Via Lauretana, a historic road that, since ancient times, connected Siena to the Mediterranean coast in the Marches region. For centuries this route was travelled by merchants, wayfarers and pilgrims. One fascinating theory holds that the illustrious painter Raffaello, while still a young man, journeyed along this road with his teacher Pinturicchio on the occasion of the mid-millennial Jubilee, leaving his artwork in the ancient Pieve di Sant’Ippolito (Parish Church of St. Hippolytus), just outside the town walls of Asciano.

Stepping momentarily away from the Via Lauretana, visitors may reach the Piazza del Grano with its spectular 15th-century fountain in travertine by Antonio Ghini, and the impressive Palazzo del Podestà.

A number of breathtaking itineraries branch out from Asciano across the unique landscape of the Crete Senesi.  There’s the historic Lauretana heading toward Chiusure and the Abbey of Monte Oliveto Maggiore, the road to Rapolano, and the magnificent unpaved road to Monte Sante Marie and Torre a Castello.