The Section of Physics within the Department of Physical, Earth, and Environmental Sciences houses one of the finest and richest historical collections of scientific instruments of Physics from the University of Siena: some 400 devices, instruments, models in perfect states of conservation, mosty from the 1800s, that stand as a testament to the evolution of the discipline, from the days when it was taught as a subject in study programmes within the Faculty of Medicine to more recent times when it became part of the Faculty of Mathematical, Physical, and Natural Sciences.

The collection of instruments of Physics was organized from 1990 to 2000, thanks as well to the collaboration from the CUTVAP Centre of Services, which published the inventory in 11 volumes of the series Mater.iali.  Today it is on public display.  The collection includes an electric perpetual pendulum by Zamboni, a horizontal microscope, an optometer and a polarizing microscope by Giovanni Battista Amici, spectrometers, polarimeters, compasses, octants, telescopes, galvanometers and other finely constructed electrical instruments, X-ray tubes, and a beautiful collection of tubes for studying electrical discharges among gases.

University orientation actvities offer the secondary schools of Siena, Arezzo and Grosseto the opportunity to take part in training programmes to explore and understand physical phenomena that range from famous to less famous occurrences.

It is possible for teachers to include groups or entire classes in some programmes that address such themes as light and colour, seeing the invisible, and measuring light, which may be modulated based on the age and previous experience of the students; all programmes include a workshop portion devoted to the qualitative and/or quantitative exploration of the phenomena involved.

More intensive workshops that include a greater number of meetings inside the laboratory (8 hrs., minimum) are part of the Piano Lauree Scientifiche (Scientific Degree Programme) and are referred to as PLS laboratories.

Programmes may be included in toto or in part within a work-study scheme, subject to prior arrangement with the Orientation Office of the University.

The Museum System of the University of Siena (Sistema Museale dell’Università di Siena—SIMUS) is the tangible result of centuries of study and research carried out in and around Siena.  The System constitutes a summa on the evolution of thought, scientific or otherwise, through collections of tools, finds, educational models, memorabilia and archival documents.  Thanks to the passionate commitment of researchers and university staff, museum resources of this sort continue in the present day to provide an effective educational tool to be used in teaching and disseminating knowledge.

Electric perpetual pendulum by Zamboni: donated in 1816 by Ferdinand III, Duke of Etruria, this is the first electric clock, created with a lightweight pendulum that oscillates between two electrodes connected to a “dry-cell battery”. In the case of some exemplars, motion continued without interruption for roughly a century!

Natural armed magnets: natural magnets were often “armed”, that is, harnessed with iron bands arranged in such a way as to increase the power of attraction. 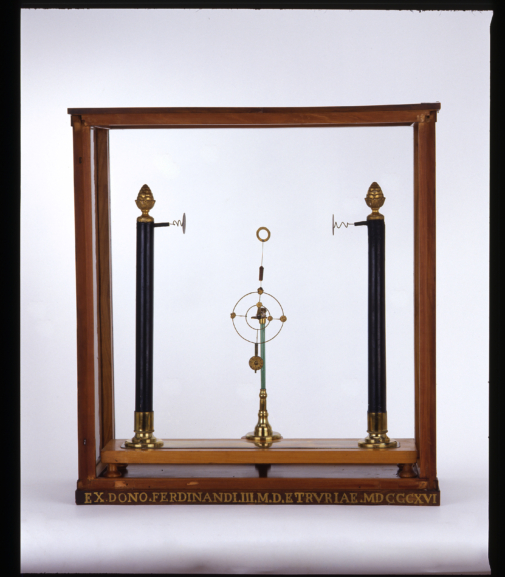 from Monday to Friday, 9am to 2pm (reservations within the day before: https://biglietticollezionefisica.eventbrite.co.uk.)