The Civic Museum of the Prehistory of Monte Cetona is situated in the 16th-century  Palazzo Comunale (Town Hall), and it illustrates the main historic stages of human habitation in the territory of Cetona.   Prehistoric activity began in the area during the mid-Paleolithic Age; intense settlement came about during the Bronze Age, especially at Belverde along the eastern side of the mountain.  This epoch is documented by a wealth of archaeological finds that make up the museum’s core collection.

The layout of the museum, organized in an educational fashion, displays materials discovered thanks to the most recent research methods, and further illustrates the evolution of the landscape in the area of Cetona on the basis of geological and paleontological evidence.

Closely tied to the museum is the Belverde Archaeological Natural Park, where it is possible to visit most of the sites in which the finds on display were unearthed. Several are caves within the travertine, inhabited and utilized by human beings since antiquity, like the Grotta di San Francesco and the Grotta Lattaia. Archaeological research has revealed that some such caves were used for religious and funereal purposes, as is implied by the discovery of human skeletons and the presence of ceramic containers that likely served to collect dripping water.

The Archaeodrome of Belverde, situated near the archaeological zone of the same name, provides an educational location to complete and enhance visits to the Museum and the Park.  The settings, the structures and the objects recreated here are inspired by the two prehistoric periods that are best-documented in this territory.  There is the reconstruction of part of a Bronze Age village, with its full-size huts and areas for handiwork activities, and there is a cave dwelling from the mid-Paleolithic Age.  The two sectors are connected by a pathway that runs through the woods along the rocky bluff above the caves of Belverde, commanding a panoramic view over the Valdichiana.

Guided tours, thematic workshops, hands-on activities, simulations of digs, and re-enactments performed by specialized personnel are all held in the various sectors of the Archaeodrome.

Archaeologists for a day: the Archaeodrome of Belverde offers visitors, and especially the youngest among them, the opportunity to become “archaeologists for a day”, with educational and hands-on activities to experience the techniques of research, excavation, and care for artifacts that have been freshly unearthed. 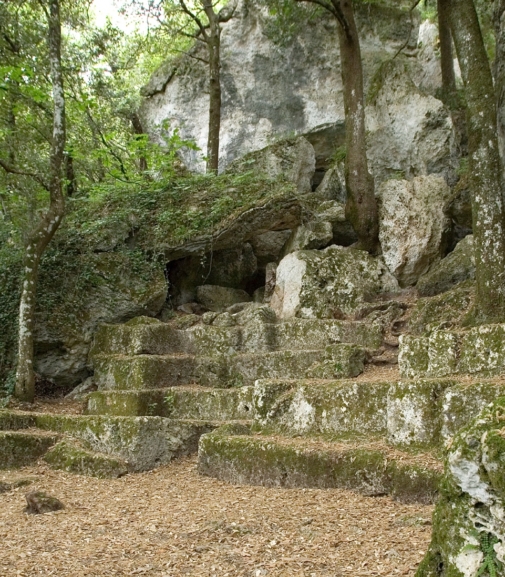 Civic Museum of the Prehistory of Monte Cetona
Via Roma, 37
53040 Cetona

Civic Museum of the Prehistory of Monte Cetona

Open also by reservation for groups of at least 10 persons

From Tuesday to Sunday, 10am to 5pm

* St. Francis Cave. In the other visiting hours Lattaia Cave and Archeodrome

Other days by reservation for groups of at least 10 persons.

Cetona grew up on the slopes of Mount Cetona. Its Medieval layout still remains largely intact, with concentric streets that climb toward the rocca (stronghold) and walkways that run along the town walls.  During the 13th century it was the dominion of the Adobrandeschi family, subsequently passing on to various Lords until it was sold to the Republic of Siena during the second half of the 1400s.  The Sienese gave the town a new layout, reinforcing the defensive structures.  Its present appearance owes much to the beginning of the 1600s during the rule of the House of Medici, when the centre of the life of the town was moved to the large rectangular piazza built just outside the defensive walls.   The most noted architectural monument is the Collegiata della Santissima Trinità (Collegiate Church of the Holy Trinity), located at the highest point of the town, originally constructed during the Middle Ages but then rebuilt toward the end of the 1400s and refurbished inside in Baroque style, as was the custom of the time.