The museum of Casole d’Elsa houses a collection that interweaves archaeological and artistic history.  At the heart of the town centre stands the well-known Collegiata (Collegiate church).  In the rectory next-door to the church, there are rooms dedicated to archaeological finds and to works of art from the territory of Casole d’Elsa. The head of a marble statue from the 19th-centurty collection of the Marquis Bargagli is of particular interest, as are two Etruscan buckles in bronze depicting a boxing match—amazing exemplars that demonstrate the economic and cultural vitality of this area during the Archaic Etruscan Period. Numerous funerary artifacts from the Hellenistic Period, unearthed at the Necropolis of Orli, prove instead that Casole belonged to the political and cultural sphere of Volterra.

The historical and artistic section of the museum is made up of two important collections of works by the painters Alessandro Casolani (1552/1553-1607) and Augusto Bastianini (1875-1938) who were born respectively in Mensano and Monteguidi, two castles in the countryside near Casole. The museum also houses late-Medieval and Renaissance works, including a fresco by Giacomo Pacchiarotti which shows the good fortune that the Umbrian school of Pinturicchio enjoyed in Siena during the early 1500s. The museum itinerary concludes in the monumental Collegiata di Santa Maria Assunta (Collegiate Church of Saint Mary of the Assumption).  Noteworthy among the numerous works of art here are two large burial monuments from the 1300s:  the Cenotaph of Messer Porrina, made by Marco Romano, and the tomb of the bishop Tommaso Andrei, sculpted by Gano di Fazio.  No less interesting is the altarpiece by Giovanni della Robbia, or the painting by the Caravaggio-style Sienese artist Rutilio Manetti.

Testa femminile di statua (Head from the statue of a woman), late-6th century, B.C.: one of the oldest sculptures in marble, this masterpiece exemplifies Etruscan artistry in statue-production.

Due affibbiagli bronzei (two bronze buckles) with embossed decoration showing a contest between two fighters: this is undoubtedly one of the most ancient depictions of a boxing match in the Etruscan world!

Testa di profeta (head of a prophet), Marco Romano (1318 ca.): this small head, showing a person in a highly charged emotional state, counts as one of the most meaningful works to emerge from the time of Italian Gothic Classicism. 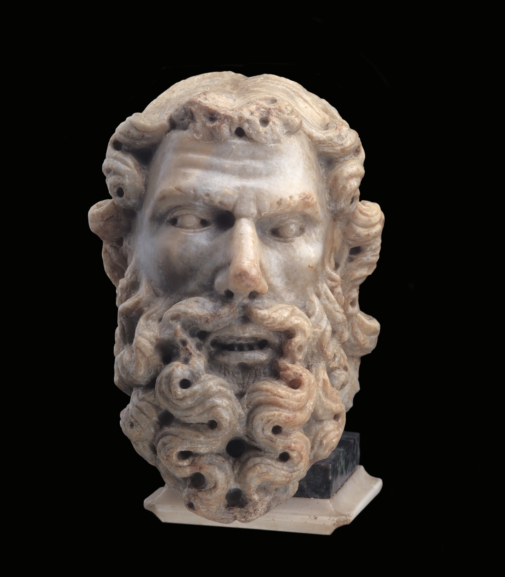 from November 2nd to Palm Sunday

The evocative land of Casole, documented in the 11th century as part of the fiefdom of the Bishop of Volterra, has a Medieval layout, but its origins can probably be traced much earlier to the end of the 4th century B.C., as is shown in archaeological evidence housed within the museum.

The main road of the town centre originally ran between the Porta ai Frati to the north and the Porta Rivellino to the south (both gates no longer exist).  Today, the town’s most prominent buildings still stand along the main road: the ancient Collegiate Church,  and the Palazzo dei Priori, its impressive façade covered in numerous coats of arms.  There is also the rocca (stronghold),  an imposing Medieval defensive structure with its massive quadrangular tower. Along the eastern perimeter of the Medieval wall girding the town there are still two circular towers built in 1481 by  Francesco di Giorgio Martini, a famous artist and outstanding military architect from the Renaissance.  In the magnificent countryside nearby, beautiful villages worth visiting include Pievescola, Mensano  and Scorgiano.