The Archaeodrome of Poggibonsi is a unique, engaging experience, a journey into the past, back to the time of Charlemagne.  It recreates on a scale of 1:1 one of the most important discoveries from the hill where thePoggio Imperiale sits: a village from the Frankish Period (9th to mid-10th century), built in the configuration of what is likely an early example of the manor system, made up of a longhouse that measures 17 x 8.5 metres, surrounded by various smaller structures used in craftsmaking and in storing foodstuffs and produce, as well as buildings serving as workplaces.

Inaugurated in 2014 and further expanded in 2016, the Archaedrome of Poggibonsi is a project that carries on with the reconstruction in progress of 17 structures unearthed during the excavation of the village from the Carolingian Period.  To date, the longhouse (a farm dwelling complete with barnyard and henhouse) has been rebuilt, along with the blacksmith’s forge, the bread oven, two hay barns and a vegetable garden.  Added to these are several temporary roofed-in areas for craftswork, scheduled to be replaced soon by other structures. Indeed, over the next few years, the Archaeodrome will be expanded to include many other buildings such as the butchery, the granary, workers’ dwellings, the ceramics kiln, and all the other structures connected to the productive activities of cultivating the nearby lands and raising livestock.

The area of the Northwestern Bastion houses two museum exhibitions, one focusing on the evolution of fortified Renaissance architecture subsequent to the introduction of gun-powder, and the other on materials unearthed in excavations, especially bone and ceramic objects.

Walking through the village, visitors get to know the small communiy of farmers and artisans who carried out their work around the manor. So the blacksmith forges weapons and  tools, the carpenter carves wood, the beltmaker works the leather, and the baker grinds the grain and prepares the bread.  Inside the house, the weaver works the loom with threads that were coloured in the dyer’s workshop.

Archaeology, hands-on experiences, living history: educational activities and events carried out with the central concept of “Touch the past” in mind, for customs and skills from the past are best experienced firsthand. 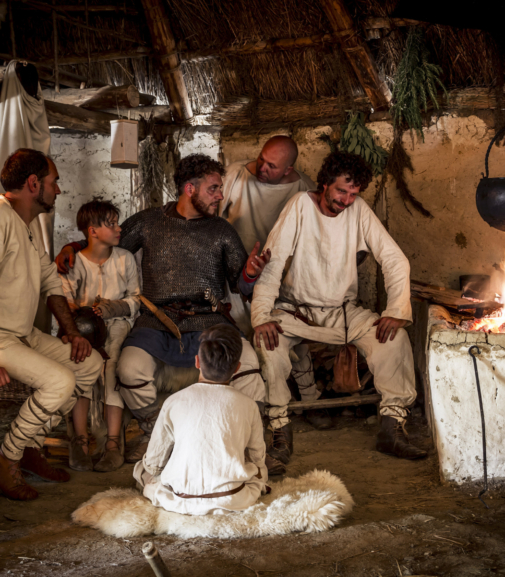 The Archeodrome is currently closed until 2023 for major redevelopment works.

Poggibonsi, built up along the Via Francigena from the so-named Borgo Marturi where assistance was provided to pilgrims, has come to represent the industrial forefront not only of the Val d’Elsa but also of the entire province of Siena. The first fortified settlement of Poggio Bonizio, founded by the Sienese Guido Guerra in 1155, was completely destroyed by Florentine troops in 1270 and then partly reconstructed as Monte Imperiale under the orders of Henry VII, Holy Roman Emperor.  Subsequently, Lorenzo the Magnificent called for the construction of a fortress designed by Giuliano da Sangallo, which was, however, never completed. From the 1300s to the time of the Napoleonic invasions, the city was under the aegis of Florence.  More recently, damages caused by bombing during World War II prompted a  thorough reconstruction in terms of city layout and structure, leading to new growth in industrial production.  Several architectural sites are well worth a visit, such as the ancient Magione, a lodging place for the Knights of St. John, and the convent of  San Lucchese.